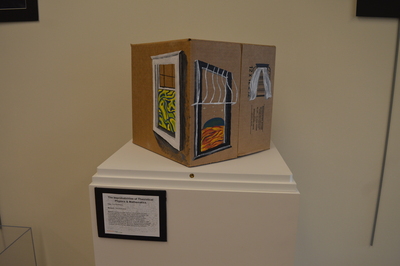 Several universes exist and interact within one larger universe called the multiverse. When viewed from a distance, the “worm hole” on the top of the piece appears to envelop the surrounding portions of the box in an optical illusion but when viewed up close, the worm hole is elliptical. This technique, anamorphic projection, is employed by many chalk artists to make their artwork appear three dimensional. Inspired by Evol’s apartment complexes on cardboard, this multiverse displays windows to other universes with the piece as a whole existing as the multiverse.